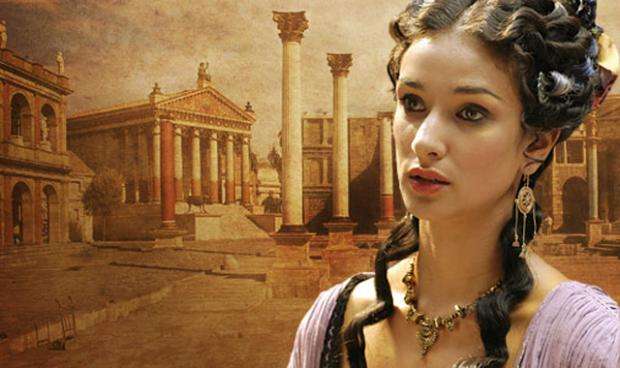 For some of us, this is a very exciting month! Why? Game of Thrones season 5 has begun!! Where do I even start? I am a big fan of Game of Thrones, not just because it has been fantastically adapted into a screenplay by the talented David Benioff and D.B Weiss, from George R.R Martin’s popular books, but also because of the stunning costume and jewellery design (and, of course, some of the gorgeous set design and shooting locations).

Yours truly was also able to bejewel the lovely Natalie Dormer and Nathalie Emmanuelle during their Game of thrones press tours!

Natalie Dormer in Gia Belloni’s earrings during her CBS GoT publicity.

I’m going to need to be careful not to write accidental spoilers here, for those who may not be current or who are still planning to watch the show. What I’d really like to look at is the talent that lies behind what we get to watch and enjoy. As a designer, my appreciation for the skill, work and design sourcing used in this show, as well as many others, is heightened (my final paragraph after the visual banquet below explains why, and how it can be useful to you). Knowing, even slightly, the kind of work that goes into this is awe inspiring. So, who is behind the costumes, the beauty of Cersei’s stunning dresses and tresses, the Grecian simplicity and yet slightly ethnic hint of Daenerys’ beautiful ensembles as well as all the costumes in between? Michele Clapton, who is an award winning costume designing powerhouse, in addition to a talented team of embroiderers, armour supervisors and hair and make-up technicians, some of whom you can read about here.

Game of Thrones is set within a fantasy world that echoes parts of our own past geography and, as such, the designers have obviously drawn from certain ethnicities, cultural backgrounds and historical looks, in addition to the storyline, the characters and the regions within the books. This is true of the costume and also of the jewellery, which is at times dainty or bold, lavish and sometimes savage. The choices made for this sort of production help to set the scene, distinguish between geographical locations, deepen the layers of narrative and give us insight into the characters cultural backgrounds and political allegiances in addition to actually giving us subtle clues as to what inner emotions some of the characters are going through throughout the seasons. (for example, during early seasons, Cersei Lannisters dresses feature caged birds, hinting at her frustration of being caged and somewhat powerless. As we progress through the seasons, her outfits begin to become more ‘powerful’ and indicative of the storyline, instead of caged birds, we start to see the Lannister lions embroidered onto strong and structural shoulders.)

If you’ve never actually fully noticed these aspects of the show, which would be quite understandable considering the blazing plots and cliff hanging episodes, feast your eyes below! The wealth of inspiration, designs, culture and fantasy is like diving into crystal clear waters of creative ideas! A little bit of this and a sprinkle of that and such beauty can be created, all for our enjoyment, why thank you very much GoT team and HBO, much appreciated!

Margaery Tyrell’s wedding dress draws from a mixture of medieval and renaissance styles, with leaves, vines and thorns delicately entwined. A hint at her character perhaps? Delicately diplomatic and intelligent, but not to be trifled with!

The stunning insects, moths and opulence of Qarth seems to combine a clever mix of fantasy, with the feelings that the designers wanted to portray about these decadent merchants. That they are all ‘show’ on the front, yet bland at the back, read more about it here.

Cersei Lannisters costumes portray her regal status, power and growing darkness. With a nod towards caged birds in season 1 growing towards the lion of house Lannister in subsequent seasons. The costumes of Cersei actually reference quite a complex character, there is a good look at this here.

Here we are being shown a darker more austere character, with a nod to the Alexander McQueen neckline there too!

With Daenerys travels have come a variety of costume and jewellery changes. Recently there seems to have been a hint of ‘elaborated’ Grecian and Roman influence, with a drop of the Arabian regions perhaps?

The stunning costume design for one of Daenerys’ dresses. That collar is a separate piece, as you can see here. I also recommend you have a look at the dragon scale dress details, absolutely stunning. In theory, that collar is a piece of jewellery.

The jewels of Qarth. Are they real, are they made? They’re actually embroidery from the skilled hands of Michelle Carragher.

Another costume jewel from the wealthy city of Qarth in Game of thrones.

Oberyn Martell, how can this not be the coolest cat in season 4? Bejewelled, cool and highly intelligent, this character must have taken some planning for the TV show! Again, I don’t want to give any spoilers, so don’t follow that link if you haven’t seen season 4 yet!

More detailing of Margery Tyrells wedding dress, showing the twining leaves and subtle thorns growing up around the shoulders and into the back of the dress.

Margery Tyrells wedding dress in the scene where she’s marrying King Joffrey, and notice the pattern and scroll-work of his crown. These would be lovely elements to use within engagement ring design

In Game of Thrones, the men are also bedecked with jewels, pins, status brooches and signet rings.

Daenerys Targaryen in her dragon scale dress with a simple yet powerful neck piece that embodies her as the ‘Mother of Dragons’. Tusks and talons have long been used within jewellery to denote status, power, safety and much more!

Looking at such lavish productions as Game of Thrones and absorbing the beauty and feel of the different aspects of design that goes into them can be a wonderful starting point for inspiration for a truly unique engagement ring or piece of jewellery. To whet your appetite for such possibilities, think of films like, Memoirs of a Geisha, The Fall (2007 film), The Lord of the Rings, The Great Gatsby, The Hunger Games, The Fifth Element, the list goes on. Whatever your favourite film may be or whatever you thought looked beautiful, there will be visual inspiration behind it that you can call on should you be looking for truly bespoke jewellery or engagement rings! This is what we do every day, we help people to create their own special jewellery using design you love and connect to. Play and have fun creating your own jewellery heirlooms or engagement rings!